The more you do extract brewing, the more you end up reading recipes and articles and forum posts where all-grain brewers talk enthusiastically about Maris Otter and Carafa Special III and strike temperatures and protein rests, and if you've got anything like my urge to tinker with recipes then you rapidly realize that you're going to have to get around to all-grain sooner rather than later. 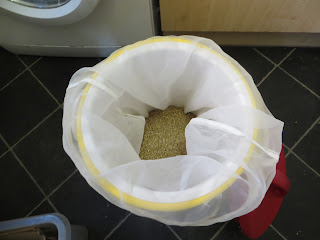 All grain - or at least, some grain.

I started off by considering (and rejecting) the following standard options:

What I've ended up with is a brew-in-a-bag-in-a-picnic-cooler system. The equipment comprises one Igloo 19l picnic cooler and one grain bag. The process is as follows:

Since my crappy electric stove can only keep about ten litres at a rolling boil, I'm currently starting the boil at a high gravity and diluting in the fermenter.

This has some downsides - you get limited sparging to keep the pre-boil volume down to ten litres, and unpredictable efficiency as a result - I tend to guess at the amount of grain to use, check the volume and gravity pre-boil, and adjust the hopping and post-boil dilution accordingly. You also can't vorlauf properly. The risk of hot side aeration is higher than if you do everything with spigots and tubes, but opinions seem to be divided as to how much of an issue that is.

In general, though, this approach seems pretty practical and I'd recommend it to anyone who's trying to brew mid-sized all-grain batches without a proper boiler. 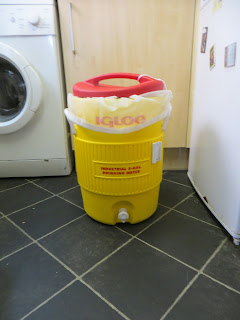 Rugged yet colourful.
Posted by DaveS at 13:49 No comments:

Being quick to raid the kitchen cupboard for wacky crap to bung into beer is one of the more easily mocked craft beer tendencies. And to be honest, I tend to a certain purism myself - not religiously, but out of a pragmatic feeling that unless they're very good, brewers are more likely to make a complete hash of a beetroot and smoked paprika Porter than they are of a straightforward American Pale Ale.

But I also don't like to rule things out, because normally whenever I come out with a definitive statement about how X is Always Bad And Wrong, a little voice at the back of my head points out something I love that does exactly X. And hence for my own brewing, rather than define a set of Things I Will Not Use, I've come up with a set of rule-of-thumb "difficulty levels" - roughly, the further down this list something is, the more competent I'll need to feel that I am before I start using it.

This isn't based on decades of brewing experience - for a given ingredient, it's largely down to a) how often I come across decent beers with it in, b) how often I come across awful beers with it in and c) how difficult I find it to imagine what a good beer with it in would taste like. This is all work in progress, though, so if someone wants to come along and tell me that you can't really go wrong with lacto-sour beers then I'll bump that up.

Update - 24/01/16 - after reading this Boak and Bailey post about Mikkeller Spontanbasil, I'm half wondering whether part of the reason that some nontraditional ingredients are easier to get right than others is that some ingredients tend to bump up flavours that you'd already expect to find in beer, while others are pretty much foreign to it. So anticipating what cocoa nibs are going to do to your stout recipe or what grapefruit is going to do to an IPA is pretty easy if you've ever had a chocolatey porter or a grapefruity IPA, but working out whether a packet of cassia bark is going to taste good if you dump it in a batch of raspberry saison takes quite a lot of imagination, and is all too easy to get wrong...

This is partly apropos of Boak and Bailey's recent post about drinkability, and partly apropos of the ongoing attempt by Americans to get their heads around the idea of a session beer and why it doesn't just mean "anything under 5%."

I drank quite a bit of Altbier when we were in Dusseldorf the other week. As a style it's basically like a cleaner, colder version of Best Bitter - brown, not too strong, varies from reasonably herbal-bitter to moderately biscuity-sweet. And like Best Bitter, it can be a truly great session beer.

In short, a great session beer demands no attention at all, but will repay as much as you want to give it.