I wanted to start off with something simple to brew and easy to drink. An APA seemed like a good bet, so I spent five minutes with Google and picked the first decent looking extract APA recipe that I found.

As you'd expect from a first effort, there are all sorts of things that I've learnt from this. I'll probably expand on some of them in future posts, but here's a list to be getting on with:

The finished beer came out mid brown, grapefruity with a hint of caramel. It wasn't super complex or aromatic and there were initially a few funky fruity rough edges that I couldn't pin down the source of, but it smoothened off with a bit more time in the bottle. To be honest, for a first brew I'd have been satisfied to produce anything that was identifiably beer, so getting something that was actually pretty drinkable was a definite bonus. 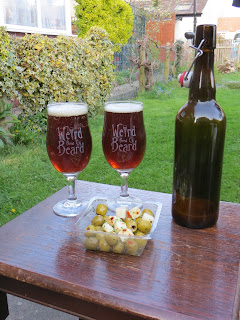 Update: a bottle of this brew ended up sitting in a friend's kitchen for the best part of six months, and that time turns out to have been really rather kind to it. The rough edges have gone, the fruity hops have basically gone too, and what's left is basically dark crystal malt cut through with a bit of bitterness - nice smooth flavours, sherry, caramel and dried fruit. I'm not sure that I could pull that off again deliberately, but I'd be interested to try!