Before I get on to the first brew, I'll blather on a bit about some of the decisions that I had to make before starting.

The standard homebrew starter setup tends to be for 5 gallon batches. This involves some fairly hefty kit to fit in a small house - the boiler in particular - and also leaves you with a lot of beer to get through if you brew a below-par batch. Alternatively, it's also possible to start off with one gallon batches. This has the advantage that you can use regular kitchen equipment for a lot more of your setup, but the obvious downside that you don't get much beer at the end of it!

I've decided to split the difference and start off with two or three gallon batches - fifteen pints or so isn't too much of a chore to get through even if it isn't great, but it's also enough that you can share your beer around fairly freely and not have to jealously hoard it. It also means that a lot of the kit is relatively compact and the process is easy to handle, although it needs a bit more stuff than really small batches. It does tend to make everything a bit nonstandard though: recipes need to be adjusted and instructions need to be adapted. A lot of specialist kit will be too big to use, but repurposed kitchen stuff is likely to be too small. Lots of problems need solving from first principles, and part of the reason that I've started writing this stuff up is in the hope that it'll help someone else to deal with the same issues.

Extract vs All Grain Brewing

Starting off brewing with extract was a simple choice. All-grain seems like more control, more fun, more parameters to play with, but on the other hand, brewing with extract plus steeped grain is a lot simpler. On the principle of trying to learn one thing at a time, it's natural to start off with extract brews and then worry about mashing once I'm confident that I'm unlikely to screw up the boil or the fermentation.

I did a lot of umming and ahing about equipment, but at the end of it I seem to have ended up with a working setup. The extract kit is roughly as follows... 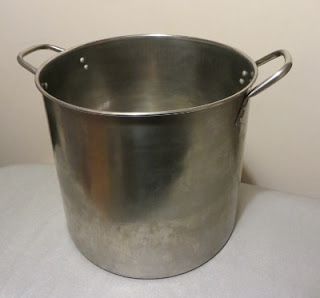 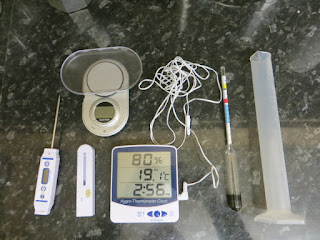 Right, see you next time when I'll actually be making some beer!