The Festival of Old Favourites 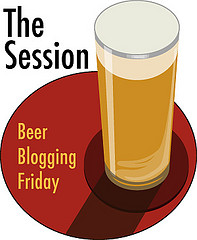 For this month's beer blogging Session, Brian Yaeger has challenged us to describe our fantasy beer festivals.

I guess the straightforward answer for me would be something like "Carnivale Brettanomyces but within walking distance of my house." But if I'm going to suggest something that's fundamentally unrealistic then I might as well go wild, so let's try something more imaginative... what if we gave great established British breweries the "craft festival" treatment? Could we have a festival where London Pride is treated with the sort of fanatical attention that beer geeks usually lavish on barrel-aged sours?

Welcome to FOOF, the Festival of Old Favourites.

The venue is an attractive old building - one of those grand public edifices that the ascendant Victorian middle class built as monuments to their own wealth, taste and civic-spirit. Although FOOF is fairly big, there are plenty of tables and seating - people have plenty of space to settle comfortably and give their beer the attention it deserves. Punters have two choices of festival glassware - straight-sided lined pint glasses for people who like to keep it simple, or stemmed tulip two-third glasses for anyone who prefers to drink with a bit more ceremony.

The beers are, basically, things that you've heard of. There are flagship and core-range beers from respected British family and regional brewers. There are also beers from newer breweries - generally the more successful of the post-CAMRA startups - but they're all familiar names from successful and established breweries - Dark Star's Hophead, for instance, and Crouch Vale's Brewer's Gold - and serious tickers will find slim pickings. Most of the beers are in styles that would sit comfortably on the bar of any real-ale oriented pub - bitters, porters, milds, golden ales - but anyone after something a bit more "out there" can head to the Strong Ales bar, to find a range of oddities and survivors from the dustier corners of the traditional brewers ranges - JW Lees Harvest Ale, Adnam's Tally Ho, Harveys' Prince of Denmark. Some of these have been aged in the cask for a year or two, or are available in aged and unaged versions.

Importantly, beer is all in absolutely immaculate condition. It's becoming a cliche to say that a lot of these beers can be revelatory if they're in perfect nick and uninspiring in anything less, but FOOF serves revelatory pint after revelatory pint. The casks are kept in a temperature controlled store, and the beer served through handpumps, with sparklers being used or not at the brewery's preference. A few beers that you'd expect to be available are actually missing - they just didn't quite hit perfect condition in time. All this attention paid to storage and condition, combined with the expensive and not overcrowded venue mean that FOOF was never going to compete with Wetherspoons prices, but there's nothing outrageous.

With my rational head on, I can see why something like this is never going to happen. But on the other hand, I guess there's a little bit of FOOF going on in pubs all over the country - anywhere that has a perfect pint of Harveys' Sussex Best or draft Bass. And in between supporting "local micros" and "cutting edge craft", some of us could probably do more to appreciate and celebrate that.